Mom and me, circa 2013
Keep em guessin!
Heading home

So I figured out what was bothering me about the grandstanding in my newsfeed this past week. It’s easy to jump on the latest cause celebre being saturated with media coverage. It requires no effort. People celebrate whatever they like on social media and feel good about themselves. And this past week I was inundated with images of stars-and-bars and rainbows.

But here’s the rub for me: if I want to make a difference, I can’t just sit on social media jumping on bandwagons that make me feel good about my opinions and biases. I need to get out there in the community and make a difference by DOING something that makes a real difference in people’s lives.

I know, I know, it takes risk and hard work to help disenfranchised children, the poor, the sick, the unpopular people in my community upon whom everyone looks down….but going out of my way to be champions for them actually will make a difference, as opposed to spouting off on social issues online and changing my profile pic accordingly.

In reading this, please don’t make any presumptions about my stance on any of the huge issues that received media (and social media) over-attention this past week; because I was sincerely happy with each decision. My point is, it’s not a good use of my time and potential to make a difference safely jumping on bandwagons or settling for attention-grabbing grandstanding.

What have you done to make this world a better place? Do the people who know you right where you live recognize you as a change agent champion for others? If not, may I suggest a little less time online and a little more time doing good…not just feeling good about what others have done to make the landmark accomplishments of the last week a reality. 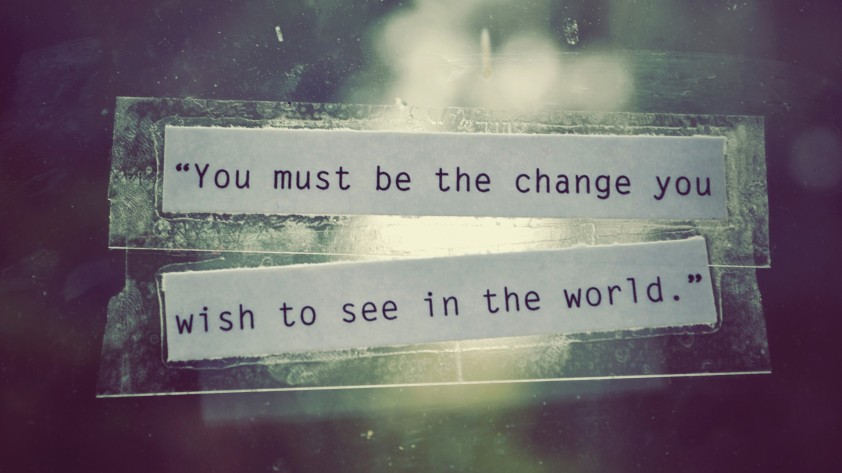 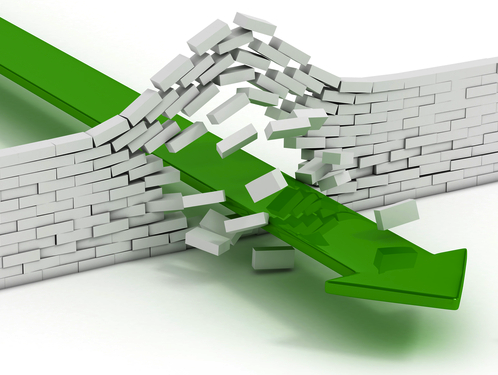 We relish stories of unexpected possibilities—little bets that created huge and unforeseen benefits. Twitter, for instance, was born when its creators noticed how alive and engaged they felt when communicating with each other in real time over SMS. The concept was brilliant, and the platform has reshaped the way the world communicates. But the initiative arose from brainstorming rather than an elaborate business plan. Tweeting caught on, in large part, because it grants its users freedom. In fact, Twitter cofounder Evan Williams has explained that, in general, his rule is to do less. We can’t foresee how uncertain conditions will unfold or how complex systems will evolve, but we can conduct thoughtful experiments to explore the possibilities.

This way of approaching situations involves a whole suite of routines grounded in a mind-set of clarity if not outright certainty. To that end, they are characterized by sharp-edged questions intended to narrow our focus: What is the expected return on this investment? What is the three-year plan for this venture? At what cost are they willing to settle? But asking these kinds of questions, very often legitimate in business-as-usual settings, may constrain management teams in atypical, complex situations, such as responding to a quickly changing market or revitalizing a privatized utility’s culture. Our tendency to place one perspective above all others—the proverbial “fact-based view” or “maximizing key stakeholders’ alignment”—can be dangerous. All too often, we operate with an excessively simple model in enormously messy circumstances. We fail to perceive how different pieces of reality interact and how to foster better outcomes.

Moving from “managing the probable” to “leading the possible” requires us to address challenges in a fundamentally different way. Rather than simply disaggregating complexities into pieces we find more tractable, we should also broaden our range of interventions by breaking out of familiar patterns and using a whole new approach that allows us to expand our options, experiment in low-risk ways, and realize potentially outsized payoffs. But be warned: leading the possible involves coping with our own anxieties about an unknowable and uncontrollable world. A few simple habits of mind presented here can prod us toward thinking and acting differently. These should not be considered a checklist of to-dos; indeed, the very point is to move beyond a check-the-box mentality.

Reposted from the Digital Is Blog:

In the Introduction to Teaching to Transgress, bell hooks writes, “any radical pedagogy must insist that everyone’s presence is acknowledged.”(8) She describes the process through which we become self-actualized in the classroom. “Teachers must be actively committed to a process of self-actualization that promotes their own well-being if they are to teach in a manner that empowers students.”(15) And, it isn’t just that students should be empowered to show up as full selves, but that teachers must as well, in order to model, but also to show the kind of care for the work that only comes when we make ourselves at least somewhat vulnerable.

Connected learning boils down to risk taking in the end. To quote colleague Jade Davis from her recent DML blog post, “I think the biggest risk in connected learning is Not Trying.” Mostly, I find that co-learning is somehow linked to a kind of “life attitude.” When I became a mother, I realized quickly that everyday my children teach me myriad vital things. These brand new people, who have so little experience, are in many ways masters of what is significant in life. A truly wise person learns from every person he or she connects with in the most unforeseen moments. This is of course the soul of co-learning. And, perhaps it is also the seed of equity and justice. But, it is not necessarily easy to maintain this outlook, especially as we continue to navigate institutional demands, programmatic expectations, and expected outcomes.

So why all this talk of leaps and risks? I truly believe there is much at stake in what is considered here. Institutional change that matters must generate first from the heart of the learning communities we design. These co-learning steps we are taking together are indeed the seeds of a kind of personal growth that can play an important role in contributing to a healthy citizenry. The transformative force for equity and justice in society lies first in the way we come together to learn. In the ways we are educated lies a foundation for how we meet the world. Striving for equity in the classroom context will set a course for collaborating and negotiating — a habit that will certainly yield fair-minded moments in unforeseen futures. A connected co-learning model is essential not just for reimagining education, but more importantly, for realizing our democratic aspirations.

Reposted from Looking Up:

A social media interaction with a school board trustee clarified for me why we need teachers who fail. I suggested that we should be encouraging a more innovative culture in our schools. The trustee snarled “Parents don’t send their children to school to be experimented on” at me. “We need to use proven methods, not just make it up”.

His attitude symbolizes a significant contradiction in schools today. We want schools to be world leaders, and use the latest most effective methods. Simultaneously, we don’t want educators to take chances, to try something new and unproven. However risk and failure are essential for learning.

If we want our educators and classrooms to be cutting edge, we must welcome failure in our teaching and learning. Our students deserve the latest, newest ideas to maximize their learning, and we can’t use those methods unless we’re willing to risk failing. In our fast changing world things move very fast. The proven, safe ideas, are already out of date.

“Our educational system and most work environments have taught us that good performance means avoiding failure, not making mistakes. This is a big problem, because failure is an unavoidable part of innovation experimentation. Innovation requires the willingness to fail and learn. Abraham Maslow, one of the founders of the humanistic psychology movement, aptly stated that an individual would engage in learning only “to the extent he is not crippled by fear and to the extent he feels safe enough to dare.”

This means that in order to innovate we need to change our attitude toward failures and mistakes. Contrary to what many of us have been taught, avoiding failure is not a sign that we’re smart. Being smart is not about knowing all the answers and performing flawlessly. Being smart is knowing what you don’t know, prioritizing what you need to know, and being very good at finding the best evidence-based answers. Being smart requires you to become comfortable saying, “I don’t know.”  It means that you do not identify yourself by your ideas but by whether you are an open-minded, good critical and innovative thinker and learner. 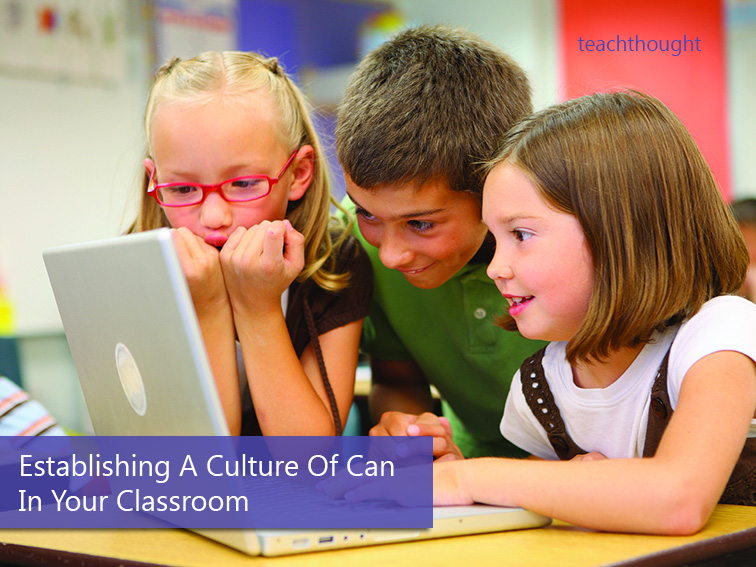 “If a learner is to develop a sense of can, he or she must learn it. While some students have more natural confidence or initiative than others, can is slightly different than confidence. Can is a mix of knowledge and self-efficacy that has been nurtured through experience — by consistently meeting both internally and externally created goals judged by standards that are also both internally and externally drawn.

So how does this happen? Where does it come from?

In Developing Minds, a kind of anthology of ways to teach thinking edited by Art Costa, there are suggestions for promoting cognition and metacognition, including “creating a safe environment,” “following students’ thinking,” and “teaching questions rather than answers.”

These suggestions often have emotional roots, implying that learning must be emotional (an implication that is hard to get away from). One broad approach to teaching that works nearly every single time — and can work here as well in creating a culture of can – is the gradual release of responsibility model.”

Reposted from the Atlantic:

“In an essay called “The Play Deficit,” Peter Gray, the Boston College psychologist, chronicles the fallout from the loss of the old childhood culture, and it’s a familiar list of the usual ills attributed to Millennials: depression, narcissism, and a decline in empathy. In the past decade, the percentage of college-age kids taking psychiatric medication has spiked, according to a 2012 study by the American College Counseling Association. Practicing psychologists have written (in this magazine and others) about the unique identity crisis this generation faces—a fear of growing up and, in the words of Brooke Donatone, a New York–based therapist, an inability “to think for themselves.”

In his essay, Gray highlights the work of Kyung-Hee Kim, an educational psychologist at the College of William and Mary and the author of the 2011 paper “The Creativity Crisis.” Kim has analyzed results from the Torrance Tests of Creative Thinking and found that American children’s scores have declined steadily across the past decade or more. The data show that children have become “less emotionally expressive, less energetic, less talkative and verbally expressive, less humorous, less imaginative, less unconventional, less lively and passionate, less perceptive, less apt to connect seemingly irrelevant things, less synthesizing, and less likely to see things from a different angle.” The largest drop, Kim noted, has been in the measure of “elaboration,” or the ability to take an idea and expand on it in a novel way.

The real cultural shift has to come from parents. There is a big difference between avoiding major hazards and making every decision with the primary goal of optimizing child safety (or enrichment, or happiness). We can no more create the perfect environment for our children than we can create perfect children. To believe otherwise is a delusion, and a harmful one; remind yourself of that every time the panic rises.”