Teachers and educators in the present fast-paced, ever evolving world of communication are presented with a plethora of options which might sometimes be overwhelming. To reduce the efforts of teachers in learning a new form of communication, we give you some of the most effective ways of using the most modern form of communication, Twitter. The 26 Effective Ways to use Twitter for Teachers and Educators Infographic is aimed at educators interested in utilizing Twitter as a communication and collaborative tool, for educators who like telling a story and effectively reaching out to an audience who they normally can’t! Check out the 26 effective ways to do that.

Learning a specific skill set doesn’t have the value in today’s world that it once did. Learning how to be more creative (and thus adaptable) – now that’s what prepares students for life beyond the classroom. Schools and businesses throughout the world are latching onto this idea. Academia has started to embrace providing courses in creativity. Many of the biggest and most successful businesses in the world now practice the 20% rule – the commitment to allowing employees to devote 20% of their work time to thinking creatively and exploring new ideas.

But this trend toward valuing creativity goes beyond the big tech companies that have long treated “innovation” as a buzzword. A 2010 survey of over 1,500 executives found that creativity is valued as the most important business skill in the modern world. “Creative” is one of the most commonly used terms on LinkedIn year after year. Creativity is no longer seen as just being for artists and musicians (not that that view was ever accurate). It’s a crucial skill for everybody to master.

Wether you want to start a new  project, write an essay, or plan an event, brainstorming is an effective method to outsource ideas and create mind maps. Brainstorming a topic before writing about it can help students focus their ideas and direct them in the writing process.

There are now several web tools that can be used and most often for free to create visually appealing mindmaps. These tools can help our students pin their ideas down on a target topic and enrich their written pieces.  I have featured several of mind mapping tools before but the list below is the most updated collection. 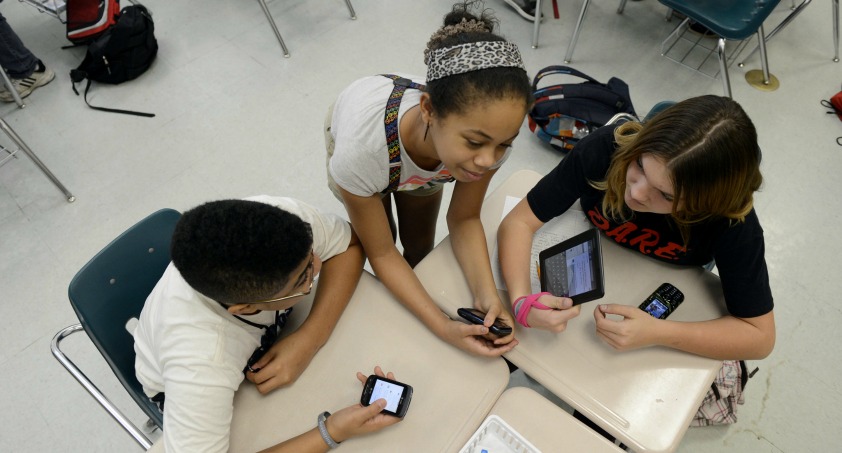 Starting in the spring of 2012, Georgia’s Forsyth County began allowing students to bring in their own devices. They installed a separate wireless network that offered filtered internet access. They trained teachers. Then they installed some ground rules, closed one eye and grimaced, fearful of what might happen.

And for the most part, it worked. In a blog post on Innovative Educator, Tim Clark, District Instructional Technology Specialist (ITS) for Forsyth County Schools, explained the shift that occurred once students brought in their own technology. “As the teachers began to introduce BYOD* into their classrooms, some fundamental changes began to occur. They no longer had to teach their students about technology in order to integrate technology effectively in their classrooms because the students were already the experts with their own devices.”

But there’s more. Clark also touts more important benefits of BYOD—those that lead to better learning. “This change in practice (adopting a BYOD program) can evolve as the teachers allow themselves to become collaborators with their students in the learning process. When the students first bring in their technology devices, they are immediately engaged and want to explore all of the possible capabilities of the technology. This initial phase of exploration passes quickly as the students become more literate in their devices and learn how to connect them to the BYOD wireless network. The teacher and the students then begin to adapt their technologies to their current classroom practices.” 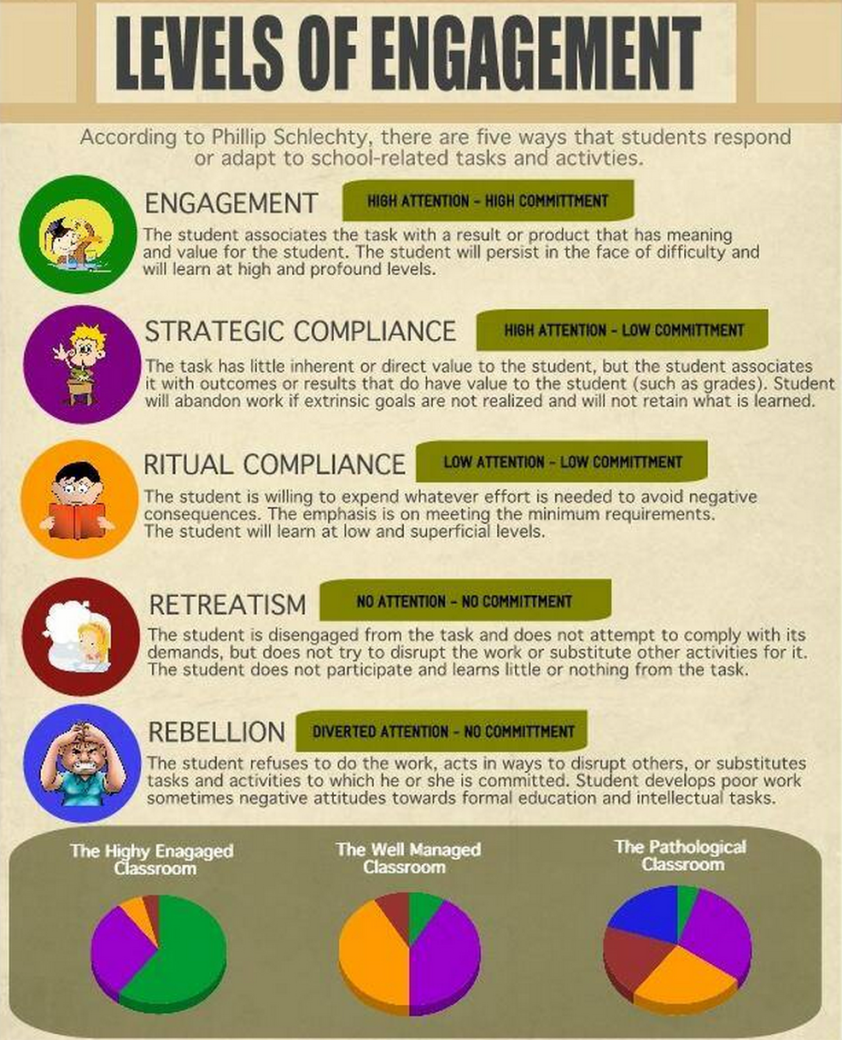 When we try to determine the level of engagement in our classrooms, we have to first define engagement. Although students may be “paying attention” to the teacher, are they engaged? Phillip Schlechty defines engagement as the level of attention and commitment students have in a lesson. Ritual compliance has been the goal inside of classrooms for many years.  That belief that if students appear to be working and are not disrupting the class they are learning is past its time. What does engagement look like in your classroom?  Are students compliant or truly engaged?

Reposted from the eBuyer Blog:

The last 20 years have arguably seen the biggest advances in education when it comes to technology in the classroom, with the introduction of computing and personal devices. As personal devices such as computers, laptops and tablets became cheaper, kids naturally became more familiar with the technology often surpassing the knowledge of their teachers or the curriculum.

Last week I was invited down to Microsoft’s “Classroom of the Future”, a concept space in central London where a team of technology and education experts display how modern tech and traditional teaching methods can be blended to create the most effective teaching environment. The modern open layout of the classroom is designed to replicate how any school could set out and embrace new styles of learning, with only minimal space and a range of funding.

So I suppose you’re asking what makes the classroom of the future so modern? Well it’s not quite as Jetsons-esque as one may predict, kids aren’t learning in self-contained education pods by robot lecturers….yet. The classroom of the future is driven by variation in learning. It’s not about simply copying text from a board anymore. Modern education, as the teachers out there will know, is about inclusivity, collaboration and getting kids actively involved.

The greatest benefit of flipped learning is the restructuring of class time, which is more of a pedagogical solution than a technological solution. However, the in-class benefit is dependent upon the utilization of technology tools. So what technologies are necessary in a flipped classroom? Jon Bergmann and Aaron Sams, Managing Director of FlippedClass.com and founding member of the Flipped Learning Network, provide a nice synopsis here. 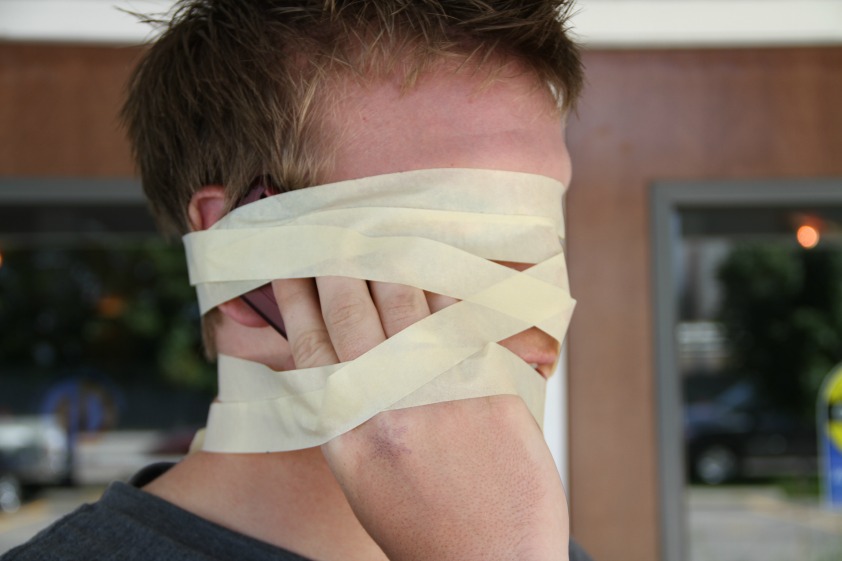 Change should be the only tradition educators adhere to.

John Dewey said, “The self, is not something ready-made, but something continuously made through choice of action.”  And since education is not ready-made either, we need to continuously grow as educators to help our students develop as people.

Education, therefore must be in a constant state of maturation and growth completely contingent upon the time and place it is happening in. In this way, we can raise and nurture vitality in our students to help them become productive members of current society.

Maria Montessori said, “Education is a natural process carried out by the child and is not acquired by listening to words but by experiences in the environment.”

As educators, each of us must aspire to develop with the times we are teaching in. The 21st century is rich with new and exciting tools in technology that we can no longer ignore and why should we? Outlawing electronics is school is ridiculous when most students have them and need to learn to use them appropriately. We could harness these tools and use them the engage and teach students more effectively rather than use them as other reason for detention.

It’s all about the hype. The spin. The pundits. The experts. The talking heads. The facts. The data. The insight. The intangibles. The inside scoop. The interpretations. The trends. The analysis. The speculation. The predictions. The records. The historical contexts. The powers that be. The informed conclusions. Really?

Every weekend here in the states football media personalities fill hours of airtime making the case for who will win the games on the schedule. They look at conferences, rankings, previous performances, position-by-position match-ups, who plays better at home or on the road, injuries, benchings, weather, scandals, human interest stories…if there’s a way to make the case for why certain teams will win today, it is made…convincingly.

Then the teams take the field. And all the posing and posturing about the result of every match-up goes out the window. Some favorites win. Some underdogs surprise. And while some general statements can be made about the power conferences, dynasties and the haves and have-nots, there is only so much rhyme and reason as to the outcomes when they are reported out on Monday morning. All the talk means nothing. Any given team can beat any other team on any given day. That’s why they play the game.

What does this mean for education? Well, we have a lot of experts and data and powers that be putting their spin on what is happening and what is going to happen in classrooms. They have a lot of money, power and influence on their side…access to media and entertainment and corporate resources…it can certainly appear and sound like they know what they’re talking about. But where does the rubber meet the road in public education? In the classroom. All the politicians and philanthropists and administrators and data analysts may have their say, but at the end of the day it is the teacher and student who make it happen.

What can we infer from this?

Make a difference in the moment. Right now. Nothing else matters. You have control over your oucome. No one else.

There’s a certain satisfaction with proving the soothsayers wrong. Truman defeating Dewey for the presidency. The Jets beating the Colts in Super Bowl III. Everyday citizens bringing down the Berlin Wall. It didn’t matter who had the perceived upper-hand or who predicted what…all that mattered was the outcome.

So…stop listening to the pundits. Get your game on, get back out there and give it everything you’ve got. Don’t let the voices on the sidelines get in your head. Sure they can have their say. But in the end, it’s up to you. You own the endgame.

Like Loading...
Video
There is a new innovation zone in Sakamaki Hall on the University of Hawaiʻi at Mānoa campus that includes three new classroom spaces—and these are not your mom and dad’s college classrooms. They feature easy-to-move, comfortable, flexible furniture that allows for multiple seating and standing options; walls and walls of white boards and sliding plexiglass surfaces to write on; the latest technologies for content display and sharing; bright rooms filled with natural light, ample outlets and a lot of space to move around.
Read More…