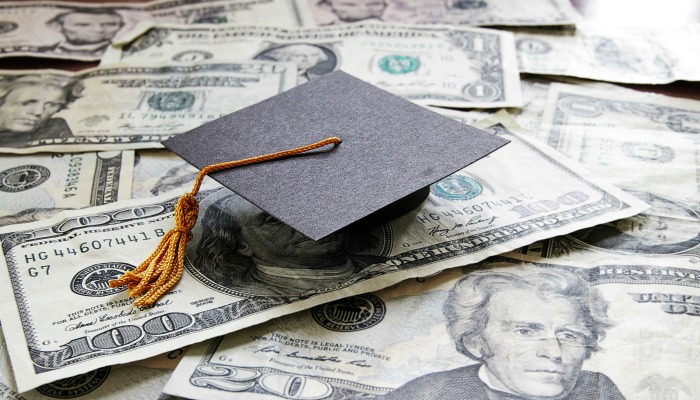 A Politico investigation has found that Pearson stands to make tens of millions in taxpayer dollars and cuts in student tuition from deals arranged without competitive bids in states from Florida to Texas. The review also found Pearson’s contracts set forth specific performance targets — but don’t penalize the company when it fails to meet those standards. And in the higher ed realm, the contracts give Pearson extensive access to personal student data, with few constraints on how it is used.

Politico examined hundreds of pages of contracts, business plans and email exchanges, as well as tax filings, lobbying reports and marketing materials, in the first comprehensive look at Pearson’s business practices in the United States. The investigation found that public officials often commit to buying from Pearson because it’s familiar, even when there’s little proof its products and services are effective.

The story of Pearson’s rise is very much a story about America’s obsession with education reform over the past few decades. Pearson has aggressive lobbyists, top-notch marketing and a highly skilled sales team. Until the New York attorney general cracked down in late 2013, Pearson’s charitable foundation made a practice of treating school officials from across the nation to trips abroad, to conferences where the only education company represented was Pearson. 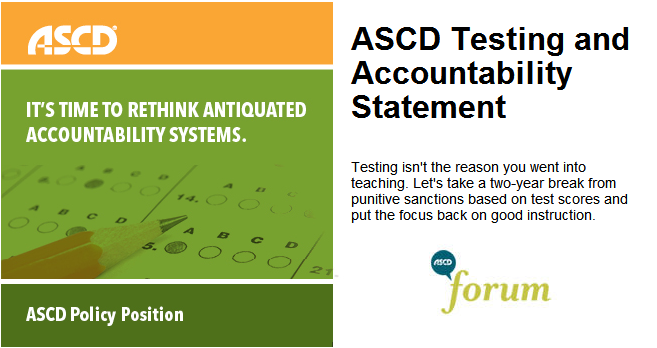 A two-year moratorium on using state assessments for high-stakes purposes is needed. States can and should still administer standardized assessments and communicate the results and what they mean to districts, schools, and families, but without the threat of punitive sanctions that have distorted their importance. ASCD is strongly advocating for a new approach in which testing is just one tool among many in determining whether our students are prepared for a successful future after high school graduation.

Standardized test results have been the defining measure of student achievement and school quality under the No Child Left Behind Act. This singular focus has resulted in several unintended and undesirable consequences, including over testing, a narrowing of the curriculum, and a de-emphasis of untested subjects and concepts—the arts, civics, and social and emotional skills, among many others—that are just as important to a student’s development and long-term success.

Making decisions about student readiness, teacher performance, and school quality that have far-reaching ramifications should never be based on a single state assessment. Yet, unfortunately, that is where we find ourselves today. Our education system is out of balance and needs to be reset so that testing is merely one component for evaluating progress and not the main driver of student learning and school improvement. 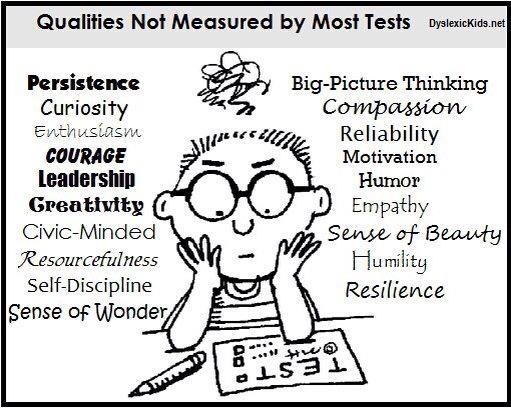 If you read the messages coming out of public schools today, more emphasis is placed on a child’s reading and mathematics score than on his or her own character, personality, and talents, despite a growing body of evidence that these characteristics are what truly count for life-long success. Alberto Carvalho, Superintendent of the Miami-Dade County School District in Florida states, “Right now, this year, we’re facing about 32 different assessments, different tests that our students will have to take, in addition to about 1,200 different end-of-course assessments mandated by both state and federal entities,” (Judy Woodruff, PBS NewsHour).

With such laser focus on high-stakes testing around the country, educators and non-educators alike continue to echo a feeling that adoption of these assessments in schools leads to less time for actual, engaging instruction and has, for many, drained the joy out of teaching. Even worse is how all this testing affects our students with learning disabilities and special needs. (I get test anxiety just thinking about it!)

As many educators go into this new year prepping for our mandated state and national assessments, how can we help reverse the negative effects of over-testing in our classroom? 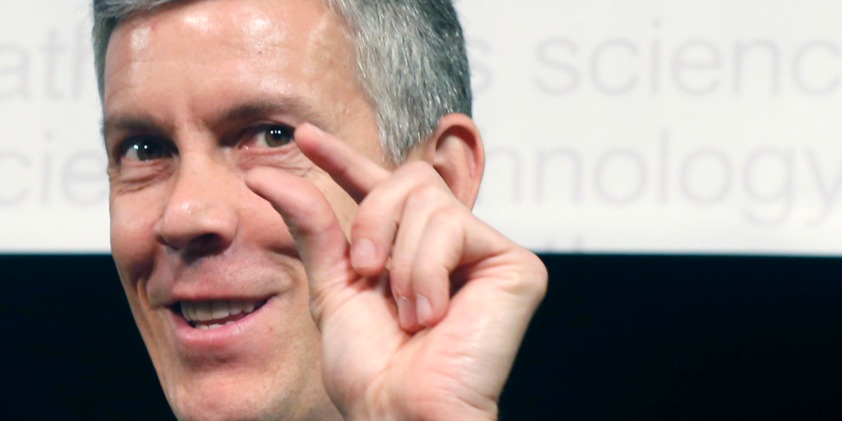 Reposted from the Shanker Blog:

Making the test the curriculum harms all students, but it does the most harm to those with the lowest skills. When I taught seniors in the Bronx, I worked with the highest-performing students who had already passed all their exams to help prepare them for the rigorous reading and writing they would face in college. We read philosophical and theoretical works ranging from Kant to Rawls to Nozick, and wrote and revised college-level argumentative essays. Though the Common Core was a far-off whisper at that point, my course far exceeded its demands, even if all my students could not yet meet them.

At the same time, I worked with the lowest-performing students who had yet to pass the New York State Regents. With them, I focused on mindless repetition of the facts that make up most of the Regents, and combined it with writing formulaic, timed essays that bore little resemblance to any real academic, civic, or career-based writing. I was really good at it, getting 100 percent to pass their exams in my final year leading Regents prep.

But I was doing my students no favors. I think to this day about T., a second-semester senior who could hardly write and struggled to read. In “Regents Prep Class” I worked with her on rote memorization rather than improving the reading, writing and thinking skills she would need for the rest of her life. The incentives were all wrong; sure, she passed the test, but she was still not ready for the community college work she encountered that fall. When we focus our efforts only on helping struggling students jump over the hurdle of mandated exams, the learning and opportunity gap widens.

The testing of every child every year began as a bold experiment in 2001 as part of No Child Left Behind. The theory of action was that if we could expose the truth about student achievement and provide appropriate “carrots and sticks” for success and failure, we could improve education for all children. The goal was for all children to reach proficiency within 12 years. That has not happened. Our bold experiment has failed. We are now in the midst of a new bold experiment as we begin using new standardized testing aligned with the Common Core State Standards. This time, for the first time, states are making these test results integral to teacher evaluation. But there are some huge problems with our new experiment.

Student assessment is an important part of the educational process. Teachers need to understand how students are progressing toward their educational goals so they can adjust instruction accordingly. What if we were to only allow assessment that would provide teachers with actionable information regarding student progress? Forget the high stakes. Let’s build systems with more frequent assessments, that are part of the instructional process, and give teachers the information they need to move students forward. Teacher evaluation would focus on HOW teachers understand their students’ needs and HOW they use this information. Students would advance in grade levels and programs based on this information. If we are interested in understanding the performance of a school or district as a whole, we can look at what students are doing in terms of advancing from one level to another. 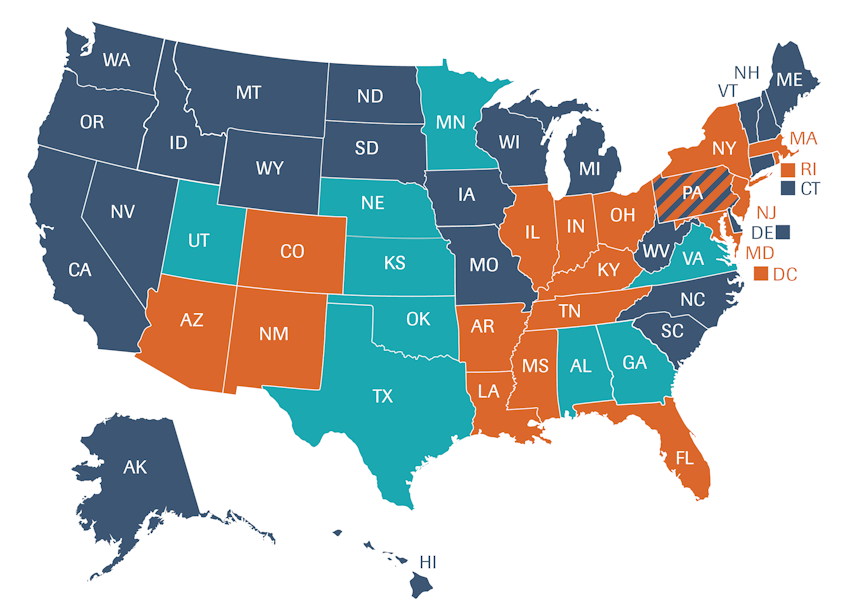 Reposted from the Education Commission of the States:

As many states began adopting college and career ready standards, such as the Common Core State Standards (CCSS), a need arose for new summative assessments. New standards require new assessments measuring the skills and knowledge outlined in the new standards.

The Education Commission of the States has received numerous inquiries for information on where states are in terms of state assessments for the 2014-15 school year. Constituents also request information about federal testing requirements.

This document provides a high-level overview of the two testing consortia and federal testing
requirements. The comprehensive chart that follows provides a snapshot of which assessments are planned in all 50 states and Washington, D.C. for the 2014-15 academic year

Nicholas Ferroni advocates for students who come to school for more than learning, and for teachers who care about their kids as people. He calls out education policy for making test results the priority for teachers, and for not validating the relationship teachers develop with students as part of the education process. “Education policy forces teachers to care more about what the kid produces in the class than what they become out of the class.” Watch this 98 seconds of compelling common sense and let it sink in. “If Picasso’s genius had been based on a standardized test, we never would have known he was a genius.”

A long ways back, when a linear assembly line was a breakthrough concept, the United States geared up to train its citizenry to be good soldiers and bureaucrats through its public schools. Everyone piled on: business, textbook publishers, the military. But as the American Century ran its course, hindsight began asking questions for which we still don’t have answers. How does this align with the capacity demands needed by our free market economy? How do we know students are succeeding? How do we measure, describe and treat students who don’t succeed?

The more we have been thinking and over-thinking the answers to these questions, the more entrenched we have become in measuring students which leads to measuring teachers which leads to measuring schools, and the coin of the realm has become data and nothing but data. And since politics and media have started driving the discussion, the boards and agencies that should be leading education are squarely and pointedly cracking the whip in the name of assessment accountability. After all, if we can reduce the entire discussion to numbers, no one has to pay closer attention to what is actually happening on the ground in classrooms to our children. Does it matter that students are being more tested than taught? That standardized testing in and of itself is not an accurate snapshot of student learning? That cheating scandals are breaking out all over the country? That no one is actually taking responsibility for the disconnect between public education and the needs and demands of our society?

Drew Carey mindlessly hosting public education like a high-stakes game show; if I didn’t laugh, I’d cry. Whose line is it anyway? It’s the line of every American who wants better for this country. And while a quip and a big thumbs-up from Drew may prompt a smile, the reality of the irony hits too close to home. Close enough to wake up the American public and change course? We shall see. Queue Ryan Stiles and Wayne Brady… 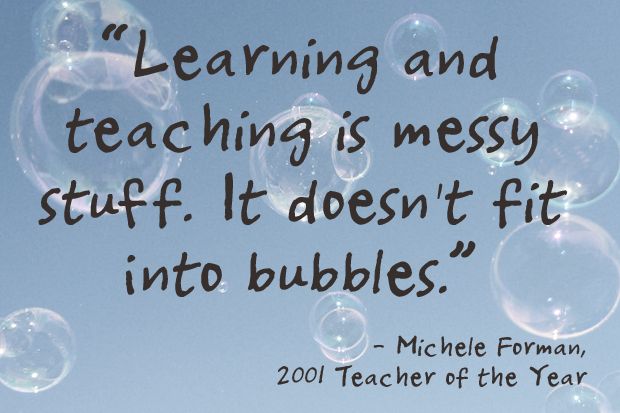 For every student’s burgeoning hopes and dreams. For every family’s aspirations for their children. For the unique needs and interests and talents of every child. For the ever-changing organic nature of society. For the morphing values and ideals of each successive generation. For the unseen future that each of us in education strives to touch. There is no one-size-fits-all delivery of instruction, standards and services that can be funded, dispensed and captured across endless matrices of ovals. Learning and teaching are messy because they are human processes. You can’t quantify living, breathing, thriving, vibrant three-dimensional hearts, minds and spirits using corresponding two-dimensional bubbles. After all, human experience teaches us from an early age…bubbles burst.

Robinson: if you get the education culture right, celebrating diversity and creativity rather than focusing on standardization and testing, we will achieve the breadth of education that all countries desperately seek.